I promised myself that this website would be what I call my ‘author website’ when I created it. I dedicated myself to sharing my literary journey in its entirety. But, today, I come with a very different message. And, heck, I know it’s totally off-topic, but I simply must share it! Yesterday, the world, or the Western World, shook yet again by another act of terror in London. This follows a series of attacks which began with a man driving towards the Palace of Westminster, and with a recent bombing at an Ariana Grande concert in Manchester. Amidst this chaos, especially after last night’s events, I ask myself this: can peace prevail in this world of ours?

My thoughts on this are not just isolated to terrorism. I am taken back to the harsh inequality and inhumane treatment inflicted on the world by colonialism. I am taken back to the subjugation of people of colour. I am taken back to the racism of Apartheid-era South Africa. I am taken back to the murders of two Indian men in a bar in Kansas simply because of the colour of their skin. I am taken back to any of the moments in recent history where one man was thought or shown to be inferior to another because of his race, his creed, his religion, his place of origin. And, I realise through all of this, is that this world is ruled by something very close to racism – but not racism itself. It is ruled by the pride, arrogant feeling of superiority that one group of people have over others. This could be a white supremacist who disregards the rights of a black person. It could also be the cowardly terrorists who show a disregard for freedom and liberty. It could be a politician declaring or implying that all whites are racist (yes, that’s you, Jacob Zuma) or it could be another politician encouraging anti-Islamic sentiments (I won’t say any names here). On that note, I should just declare that Islam, like any other religion, is a religion of peace, and so the answer to terrorism is not an attack on Islam. For more details on the nature of Islam, I refer you to a Ted Talk by Lesley Hazleton (a Jewish personality of great intellect).

Have I (or Lesley Hazleton) convinced you to accept the beliefs of all people, including Muslims? I should hope so, but if I haven’t, here’s my message.

Let us stop blaming groups of people for acts against humanity. Instead, let us unite. Wait, I can hear people screaming ‘close the borders!’, ‘don’t let in immigrants!’, ‘cultures should not be allowed to mix!’, or something else of that sort. If I may, let me stop you there. In terms of diversity, I come from South Africa. Here, I have witnessed first-hand the brilliant capabilities that diversity has. I have witnessed the peace with which the South African melting pot of culture continues to live.

Now, this may not even be enough to convince all the naysayers to accept diversity. But if you take away one message from this blog post, let it be my final plea.

Let us be honest with ourselves, all discrimination of all forms needs to stop! We should not frown on Christians or Muslims or Jews or Hindus. We are all human, and no religion teaches terror. No race teaches terror. We must accept and forgive even those who harm us – this is humanity, and yes we can protect ourselves against terror, but we must never act like the terrorists by attacking people because of their affiliation with any group be it Islam, or the West. I believe that we have forgotten what peace means. We have forgotten what humanity means, and we must rediscover both! I just don’t see why we as humans cannot accept other people who are different from us – is that so wrong?

But I believe that we are just proud to unite, too vain to unite, feel too superior to unite. We always want to be and feel better than someone else. Why can’t we all be our best together? Now I am not a communist if it may sound like I am, but I just think that we should learn to respect difference and then many issues will dissipate, in a time of course.

And yes, vanity and pride are natural characteristics which we all bask in. But, we should not let those feeling make us think that others are wholly lesser than us. We are better in some ways, and they are better in other ways. That is what being human is – being flawed, and being talented in multiple facets. I believe that humanity is the acceptance of that, it is the peace with that. It is when terrorists will respect the sanctity of life. When they will respect the values of liberty and equality. It is when white supremacists or Islamophobes will accept people of colour, or people of different religions, and will allow them to live alongside them. This is what is needed: acceptance, and respect.

Now, I know that I am an idealist, and this will probably never be achieved. In fact, I am sure many readers of this will abandon the post if they haven’t already, but I believe that every change we make – accepting our crimes of the past, recognising how those injustices have shaped the present, and showing humanity to build a better future – will make a difference at the end of the day.

I leave you with that message, and I hope that you take it out and into your life and daily practice. 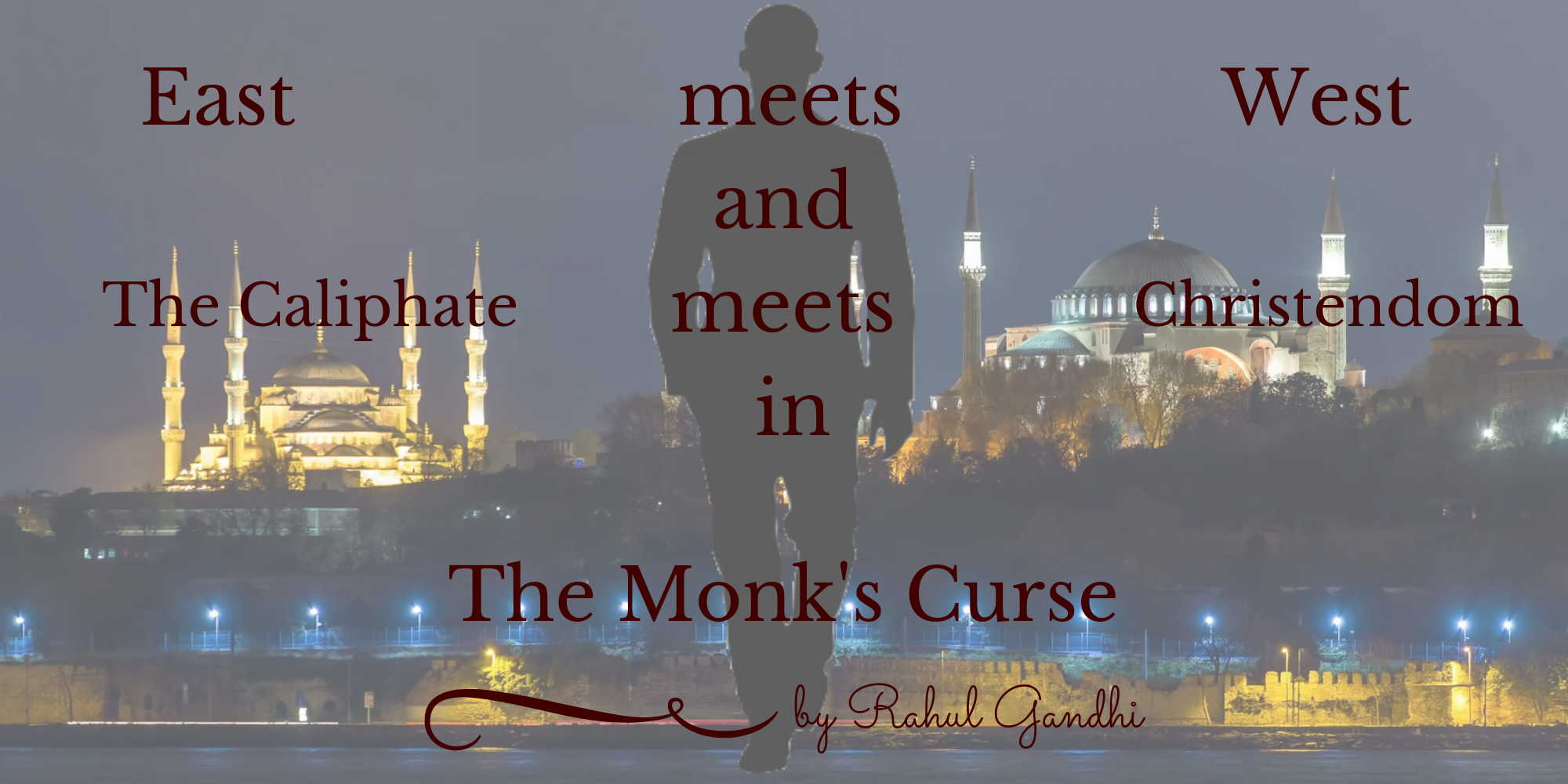 From the heat of Arizona to the snow deep in mountain ranges, to Istanbul, The Monk’s Curse will plunge you into a strange world – ever shifting – that will tickle your senses and keep your heart racing.

A few weeks, or was it months, ago, I announced here that I would be redefining my online literary persona. In doing so, I redesigned my website, unpublished all my books, and immediately began working on The Monk’s Curse.

Now, in the beginning, I did not reveal much. To be precise, this is what I said:

One of the things that have sparked this reinvention was the conception of The Monk’s Curse. I can’t say much about it, but I describe it as the riveting story of a boy, a prophecy, and a monk. It’s a story where East meets West and the Islamic Caliphate meets Christendom. Oh no, I have said too much! What I can say is that while writing this novel I have made up the most outrageous of fake histories, the evilest and naive of characters and the most scholarly prose. You won’t find too many action scenes in this novel. It is a political masterpiece with constant machinations going on behind the scenes. If you are anyhow interested in scholarly and political mysteries, keep your eye out for this book.

Basically, all I knew when I began writing was what I had told you all. There would be a boy, a monk’s curse (the prophecy), and a whole host of complex characters.

But, as I began to write it, I noticed that I was focussing less on the monk’s curse and more on where the plot was taking me. To be precise, I noticed that my characters were leading my fingers as they typed. Well, what I mean to say is that my words were being guided by the story itself, and not my mind. Now, to seasoned authors, or readers who follow authors closely, this idea would seem quite a cliche. I suppose it is, but I also suppose is that that is what creates a great story.

So, when I began, there was a curse, a boy affected by the curse, and a few secret societies manoeuvring for control of the boy and for supremacy. That was the first chapter.

In the second chapter

Here is where I discovered how intricate the story would become. A minor member of one of the secret societies addresses his masters after committing certain acts. His masters are furious and order him to cease the carrying out of those acts. This is where the antagonist is born – an antagonist I didn’t even know I wanted.

It gets better. I started writing about characters whom I had identified as the ‘good guys’, but as if under a monk’s curse I encountered confusion, in myself and in my characters. I could no longer tell who was good and who was bad. Who could the boy trust? Who could we, the readers, trust?

And this all went on and on. Soon, I started a habit which I had always read about but had resigned as unnecessary: the habit of sporadic note taking. I had to do this because with the twists came brilliant new ideas: ideas of dialogue, assassinations and hidden histories. Right now, I have about ten memos, and I can’t even remember what they relate to. Alas, the note taking tip doesn’t work!

But, why am I telling you all of this?

Readers often don’t care about the creative process, and I must admit, neither do I. I couldn’t care less how J.K. Rowling or J.R.R Tolkien conceived their epics. However, I am telling you all of this, because I wish to pass on one simple message. If this story can surprise me, imagine how it will surprise you. I love to read books that keep me on the edge of my seat, and I can promise you that this one will.

From the heat of Arizona to the snow deep in mountain ranges, to Istanbul, this novel will plunge you into a strange world – ever shifting – that will tickle your senses and keep your heart racing.