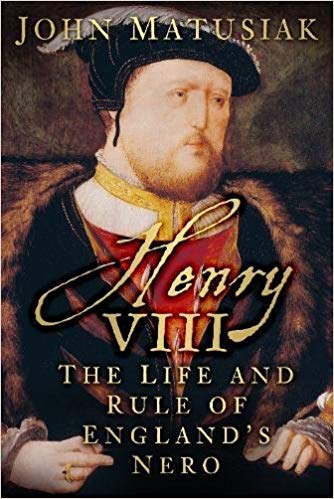 A flowery description of a deeply flawed man, the fabled Henry VIII

Henry VIII is no doubt infamous. His name is not accompanied without instant recognition and the thought of his six wives. And yet, Henry VIII: The Life and Rule of England’s Nero, stood out in that it challenged the conventional biographical depiction of England’s most famous Tudor monarch. Here is why.

Henry VIII was suddenly depicted as a human

The man fabled for his strength, his opposition to the Catholic Church, and his determination to father a male heir is made human by John Matusiak. Suddenly, we see the real relationships between Henry VIII and at least five of his six wives. We see his insecurity as a man who had never been intended to succeed Henry VII, and thus never trained to rule, but eager nonetheless for the limelight. We see a man so deeply devoted to the Catholic Church that one of his closest adviser, Thomas Wolsey (one of the many Thomases who would come to advise the inept King), is a cardinal and primate of the Catholic Church of England.

But for all its merit…

Henry VIII: The Life and Rule of England’s Nero falls short. It spends the majority of the time discussing the times of his first marriage to Catherine of Aragon, glossing over his later life, and even leaving us with quite a disappointing assessment of his death and legacy.

Even his split from the Catholic Church and the Dissolution of Monasteries leaves the reader in want.

Fundamentally, the book (which reads more like an irritatingly literary superfluous novel than a critical assessment) focuses too much on Henry VIII and his aides, promising to paint the full picture of the man, but falling short in that it never explores how that man came to be, only painting the picture of the result. Again, this leaves the reader in want for more. And, as a historical account, it lacks the necessary references to the detail that it delves into.

Promised as a unique assessment of Henry VIII, it certainly succeeds. For the novice to the history of the Tudors, this is no doubt a great book to read. But, for the seasoned reader seeking the development of the man, there is nothing save fanciful prose uncharacteristic of non-fiction, even with the occasional gory descriptions of the many murders sanctioned by this flawed King.

But, reading as a novel…

… the book certainly succeeds. And, it does a hell of a job keeping the reader hooked. Perhaps that overshadows its flaws – flaws which only arise due to the book’s promising description.

Reading it as a story even left me slightly irritated when it became evident that my own knowledge of Henry VIII’s history would prove to be spoilers to this fanciful tale.

So, once again, to the novice, this book is certainly worth reading. A great introduction to the world of Henry VIII.