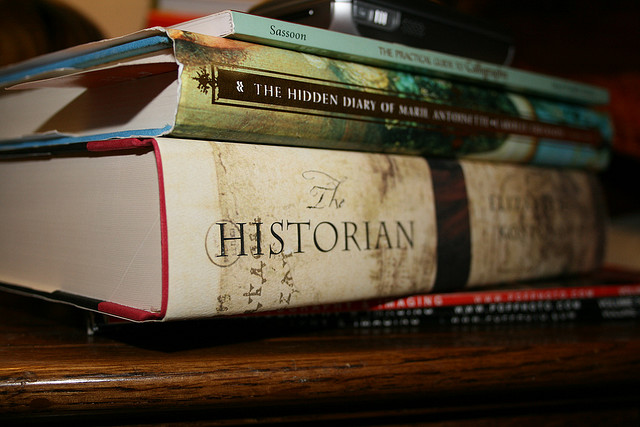 I have read and loved many books since I can remember learning to read. Yet, I have only read a few of those over and over again. These special books, enough to make me read them again, include the whole Harry Potter series, The Da Vinci Code, and, most recently, The Historian by Elizabeth Kostova.

Today, I want to write about why the last book is special to me. It is a long book. And, it is undeniably boring. That reminds me, there is another book that I have just read, matching the same description. But, more on that later.

The Historian – An Excruciating Task

When I first read The Historian, I was at a point in my life where I was determined to rekindle my relationship with reading. To do this, I chose a tome of epic proportions – one that would give me many sleepless nights trying to get through it. The Historian promised Dan Brown proportions of marvellous plot and intricacies.

I was bitterly disappointed in many ways. This 720-page book did not take me many nights to finish. It took me a day. It was not full of exhilarating plot.  To top it off, the book was lengthy and boring.

At the time however, I did not see all of this. I thoroughly enjoyed the book. It was a perfect rekindling of my literary love affair. The beginning of more sleepless nights, fighting to finish books boring and exciting.

But as I read what I had learned to call my favourite book over and over, I also learned to call it the most excruciating read I ever had to face. It drew me in like an unwise fool each time I began to read in anew, only to spit me back out – lethargic, and wiser, telling myself that I would never subject myself to that torture.

The Historian – Undeniably, a Love Affair

You are most certainly confused by now. I have taken the time to write a lengthy blog post – a review – of a book which I called special. And, I am criticising that same book to unfettered ends.

You see, I have bittersweet thoughts about The Historian. I love it, but I also hate it.

Why do I love The Historian?

There are many things to love about The Historian. It presents a wide myriad of cities, towns, landscapes, and historical climates to the reader. Through Kostova’s brilliant prose, she displays erudition beyond compare. I have never seen another author understand what she has understood so intimately. This includes the cultures of almost every country in Europe, and Turkey, as well as the complex history of those regions from the early 15th century up until the Cold War. She also demonstrated a deep understanding of their foods, languages, and social tendencies. Undeniably brilliant, she has created a tapestry of history, culture, travel, scenic landscapes, monasteries, and let’s not forget, vampires.

So why do I hate The Historian?

But, that tapestry is not smooth and artistic as it seems. Beneath the beautiful prose and stellar description is a rotting that makes the tapestry hard to follow. The 720-page tome is laden with narration from various aspects. An unnamed girl. Her father. Her father’s advisor. And if memory serves me correctly, a few others. And the narration is sewn in quite jarringly through the plot. The reader is constantly switching between the narrators, their letters, descriptions of libraries and monasteries, and examinations of manuscripts.

And while the plot was undeniably motivating – or maybe it was just the challenge of reaching its resolution that motivated me – even when the reading got rough as I stumbled through the beautiful yet discordant descriptions, it came to a crashing halt when the villain, Dracula, was revealed to be no more than an ****SPOILER ALERT**** irritated librarian.

Kostova had kept me reading through the entire tome, enduring the seemingly repeated descriptions of places and things, and somehow keeping track of the complex plot, all in the hope that the resolution would be as exciting as the book description promised. Instead, I was met with a disappointing anticlimax followed by another lengthy resolution.

Was The Historian worth it?

So was The Historian worth it? Was the excruciating read something I would endure once again. Oh yes!

I will always return to The Historian, because even though I know its end, and I suffer through the intricate plot (which I have come to know, almost), it never fails to surprise me with just how masterfully crafted it is.  It is a marvel how Kostova has created such a masterpiece whose only failings are its complexity of plot and anti-climatic resolution.

I do not see myself as someone who only reads for pleasure. Rather, I read to broaden my mind, to learn. And The Historian taught me. It gave me exactly what I had secretly been looking for. A story of the past, moulded into a story of the present, with history, travel, food, and culture intertwined in it. It is certainly not a fast paced read, but I was somehow excited by its boring nature.

I would definitely call it a travel guide. But its a damn good one at that. And, if one is to read a travel guide, why not read one that will expose you to the countries’ places, food, language, and culture while telling a story. Even if that story has a disappointing end.

Kostova has undoubtedly created something that is hard to rival. It has various major flaws, but I am only writing about them here because I must. I do not even think about them when I return to the book.

So, as with any literary novel, many will hate The Historian, but I am sure, that in time, it will be remembered as an unrivalled piece of art.