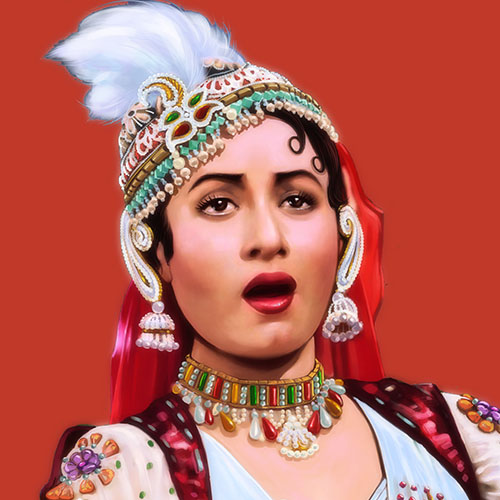 Mughal-e-Azam is one of the most iconic films of all time. I had the distinct pleasure of watching it for the second time a few days ago.

But for those of you who have never heard of it, here you are.

Mughal-e-Azam is a Hindi language film. As one of the most iconic films in Bollywood (the largest film industry in the world) history, it is known to millions of people today.

It remains an enduring tale much like Romeo and Juliet as it depicts the struggle of the love of Prince Saleem (who would go on to become Emperor Jehangir of Mughal India) and Anarkali (a courtesan – a dancer in the Mughal court). The antagonist in this film is the Prince’s father, Akbar the Great – the finest Emperor that the Mughal dynasty ever produced. Akbar struggles to allow his son the freedom to love as he is bound by duty as Emperor to never allow Saleem to marry a woman of low birth. Such is Mughal custom.

And yet their love endures. The greatest love in Mughal history.

Now, in history, it is not known if Anarkali ever existed, but Mughal-e-Azam firmly imprinted her identity in the minds of millions of Indians.

It was originally made as a black and white film with a few colour scenes, notably the song of Pyar Kiya To Darna Kya:

The song is a song that strikes the heart of many for its powerful meaning. Translated to English, the song’s title roughly translates to ‘Having loved, why fear.’

In the film, it is a powerful image of the defiance of Anarkali to the customs of Mughal India as she overtly challenges the Mughal Emperor himself. In one part, she even lays a knife at his feet, daring him to kill her – not fearing death for she has loved.

The song is made even more powerful by its set. As one of the few scenes shot in colour, the set of the song was made with no expense spared. Displaying what would have been the full splendour of the court of Akbar the Great, it forms an eye-pleasing set that matches the grandeur of Anarkali and her love for the Mughal Prince. The set was so iconic that at the film’s premier in Mumbai, the set was installed as a feature that certain ticket paying film goers could explore. This privilege is one I would have thoroughly enjoyed. Alas it was over fifty years ago.

But the set aside, the song is made even more powerful by the dance of Anarkali. The valour of a poor servant aside, it depicts one of the finest actresses in Indian history in her prime – Madhubala.

A beauty unrivalled, Madhubala remains an iconic Indian actress shrouded in the tragedy of her life. As beautiful as Marilyn Monroe, she too shared Monroe’s fate when she met her untimely death at the age of 36. This would be strangely akin to her fate in the film – one left woefully unfulfilled.

James Burke, a photographer for Life Magazine called her the biggest star in the international film industry. Beholding her beauty, it is not hard to see why. Her beauty is matched by her prowess as a dancer – a skill masterfully captured by Mughal-e-Azam’s most remembered song.

As a whole, the film of Mughal-e-Azam proves to be a potent concoction. With no expense spared on its set, it tells an enduring tale in poetic verse and beautiful songs and dance, performed by the all-star caste of Prithviraj Kapoor (the progenitor of the famous acting Kapoor family of modern Bollywood), Durga Khote, Dilip Kumar, and Madhubala herself. Even in black and white, the tale is not dimmed. So much so, that even the colour reproduction done in the 1990s dims in comparison to its original production.

But for all its merit, Mughal-e-Azam appears as little more than the masterpiece made solely to show off the brilliant personality, beauty and grace of Madhubala.

It is a beauty and a grace that everyone should see, and if not in the whole film, then at least in the song ‘Pyar Kiya To Darna Kya.’ It is on Netflix (in the original black and white form) for anyone who wishes to watch it.